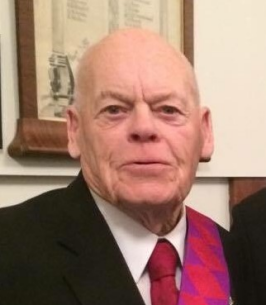 ROBINSON, Denis
1929 – 2022
Mr. Denis John Robinson of Red Deer, Alberta passed away at his home on Wednesday, August 31, 2022 at the age of 93 years. Denis was born at Walmer, Kent, England on June 3, 1929 to parents, Charles and Rose Robinson. At the age of fourteen, Denis began training to become a Red Seal Mechanic. Denis met the love of his life, Anne, and the couple were married on June 30, 1951. Seven years later, they unexpectedly welcomed their only child, Randall. They came to Canada in 1956, arriving in Red Deer on July 1, Canada Day. Denis had many accomplishments throughout his life. He served in three different military branches, the Royal Marines Cadettes in Deal, Kent, England, Her Majesty’s Royal Airforce, and the 78th Field Battery Royal Canadian Artillery. Denis was also a member of Red Deer Lodge No. 12, Keystone No. 12, and was appointed Grand Steward for the Grand Lodge of Alberta in 2006. Denis was a member of the St. Leonard’s On The Hill Anglican Church since 1969, and had received the honor of being Confirmed at the Canterbury Cathedral during the second World War. Denis was also a Lay Clergy for over twenty-eight years in the Red Deer area. He was a man of many talents and helped many people in his life. His personality was larger than life and he will be truly missed by all that knew him. Denis will be lovingly remembered by his wife of seventy-one years, Anne, his son, Randall, his sister, Margaret Weeks of Dover, England, and his dog and companion, Mud. A Celebration of Denis’ Life will be held at a later date. Cremation entrusted to Parkland Funeral Home and Crematorium. Condolences, memories and photos may be shared and viewed at www.parklandfuneralhome.com. Arrangements in care of Parkland Funeral Home and Crematorium, 6287 – 67 A Street (Taylor Drive), Red Deer. 403.340.4040.